How to harmonise defence, security and sustainability on a European scale 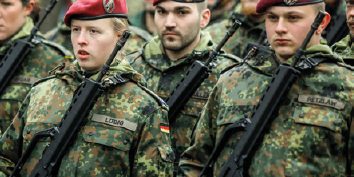 In the current European debate, our security requirements and need to defend ourselves are not commonly acknowledged as indispensable prerequisites for sustainability. Part of the reason for this is that, among the 17 UN Sustainable Development Goals, Goal no.16 is understood as our obligation to export our values to developing countries. However, it is not perceived as addressing our own security needs. Although the UN Resolution 70/1 of 25th September 2015 rightly points out that, “there can be no sustainable development without peace and no peace without sustainable development”, the task of maintaining peace and security in Europe has not yet been properly reflected in the 17 sustainability goals, neither at the level of the EU nor in the German Sustainability Strategy of 2021.

The Green Deal does not focus on security

Consequently, the EU Commission’s “Green Deal” does not focus on peace and security either. Triggered by the “Green Deal”, the EU Directive 2019/2088 on sustainability-related disclosure requirements in the financial services sector came into force in March 2021. However, there are no widely acknowledged sustainability criteria in place. Instead, actors in the private financial sector, such as private banks and insurance companies, have been devising their own sustainability assessments, which – understandably – are driven more by reputational aspects and profitability goals than by public interest. Banks have also been quick to start terminating their business relationships with security and defence-related companies, even if these companies are supplying equipment to armed forces or other security agencies in EU or NATO countries. Furthermore, banks are refusing normal services (such as guarantees and loans) to these companies. There are widespread examples of this kind of refusal, especially to SMEs. Finally, the assets of security and defence companies are frequently excluded from sustainability funds which means that the value of security-related corporate assets has been constantly deteriorating.

As the criteria for measuring sustainability remain unclear and inconsistent, a strong influence is exerted on banks, insurance companies and their professional advisors by the fashionable view, widespread in European societies, that weapons, even for defence purposes, are unethical. Another example of this trend are so-called “civil clauses” as practised in several German universities, resulting in a ban on dealing with military and armament topics. Even in the case of the first German Federal “green” Bond issued in September 2020, the prospectus published by the Federal Government explicitly excluded from the use of the bonds’ funds, “armament, defence, tobacco, alcohol and gambling”, in precisely this order! Considering armaments and defence on a par with tobacco, alcohol and gambling also indicates a disregard for all the soldiers of our armed forces, who – just like police officers – are committed to safeguarding our constitutional values for which they risk their lives when discharging their duties.

This makes the so-called “EU Taxonomy for Sustainable Activities”, which is currently being drafted and which is based on the three key concepts of “Environment, Social and Governance” (ESG) all the more important as a guide and potential “crash protection” for our industries. Environmental taxonomy criteria have already been established by EU Regulation 2020/852 and are comparatively easy to understand.  “Social” taxonomy criteria, on the other hand, are, by their very nature, more difficult to define. Nevertheless, the “Green Deal” will require a taxonomy for all three chapters of the ESG with the focus on armaments and weapons residing in the “social” sustainability domain.

Once the measuring system for the three ESG chapters is implemented, the taxonomy classification of industrial activities will only allow for three outcomes: industrial activities will be rated as positively sustainable, as negatively counter-sustainable or as sustainability-neutral. An advisory group set up by the EU Commission for the taxonomy area “Social/Governance” – chaired by a representative of the German protestant church – started its work in 2021 with the remark that it would lean towards classifying the production of weapons as a “socially harmful activity” (assuming that peace is possible without weapons). However, since then apparently, only “controversial weapons” would be regarded as unsustainable, which would still leave all other equipment for armed forces in EU and NATO countries assigned, at best, to the neutral area of the “social taxonomy”.

For banks and insurance companies, this would be another signal to continue to view European security and defence companies as they did before, i.e. to consider them as unsustainable and exclude them from their business, because they are urged by the EU to favour only positively sustainable activities. Instead of adopting this “neutral” stance however, the EU taxonomy should, on the contrary, acknowledge that weapons, in the hands of armed forces and security forces of EU and NATO countries, should not become the victim of a social fad. Peace and security are typical “public goods” for which the EU and governments of its Member States have to take responsibility, rather than leaving them to the discretion of private market players. The recent categorisation of nuclear energy as “environmentally sustainable” demonstrates how the taxonomy mechanism needs to be framed in order to have a significant impact on the private banking sector.

Since the preservation of security and defence in Europe is in fact an indispensable prerequisite for all other sustainability values, it is imperative that all economic activities designed to equip armed forces and security forces in the EU and NATO, are classified as positively sustainable within the framework of the taxonomy. Alternatively, solutions could be found outside the taxonomy regime. As pointed out in a recently published document (entitled “Commission contribution to European defence”) it is of overall importance “to ensure that other horizontal policies, such as initiatives on sustainable finance, remain consistent with the European Union’s efforts to facilitate sufficient access by the European defence industry to finance and investment.” This sentence in a key document on defence issued by the EU Commission at least triggers some hope that the harmonisation of defence, security and sustainability will be achieved before markets have destroyed the capabilities of our security and defence industries, in Germany and elsewhere in Europe.

has been the General Manager of the Federation of German Security and Defence Industries (BDSV) in Berlin since 2017. He was born in 1955 and holds a Doctorate in Law from Bonn University (1982). After being part of  Otto Wolff AG’s legal department in Cologne (1982-1990), he joined Thyssen Industrie AG in Essen, where he held leading positions until 2017: among others, CEO of the Transrapid Planning Process (1997-2001), Chairman of the Executive Board of ThyssenKrupp Marine Systems (2009-2012) , and prior to his current position he was the Chairman of ThyssenKrupp Industrial Solutions’ Executive Board.