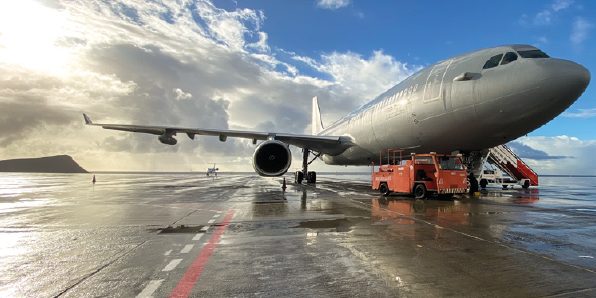 The MMF Programme is a reference
for future defence armament cooperation

European Nations face since long an unpredictable strategic situation. New scenarios require new capabilities in growing numbers, whilst the cost of individual weapons systems is increasing exponentially, stretching to the maximum the funds allocated for defence investments. The multinational organisations devoted to European Defence and Security reacted in support of their Member States launching concepts and initiatives such as “Pooling & Sharing” within the European Union (EU) in 2010, or “Smart Defence” solutions of NATO in 2011 with the intent to optimise the available resources. The Multinational Multi-Role Tanker and Transport Fleet (MMF) serves as a first example.

The genesis of the MMF

With the support of NATO, at its 2012 Summit, the European Defence Agency (EDA) took the lead of an initiative to address the shortfall in Air-to-Air Refuelling (AAR) and strategic capacity in Europe. A Letter of Intent (LoI) signed by 10 European Nations became the genesis of today’s Multinational MRTT Fleet (MMF). This was possible thanks to an excellent management.

The role of EDA: The political acknowledgement of the shortfall was crucial for the successful launching of the MMF project.

The task for OCCAR: to launch the MMF initiative. NSPA delegated into OCCAR the responsibility for managing the complex contract processes associated with the acquisition of the fleet, the production oversight, its acceptance and the Initial In-Service Support.

The MMF represents the best example of a successful answer to cover cost-effective military capability gaps. The response to those urgent calls recommends to join efforts and reach a flexible solution that mitigates the most critical European capability shortages.

Being now close to the delivery of the seventh MMF aircraft of the nine currently on contract until 2024, it is of special interest to analyse the main success factors of the MMF Programme that may have applicability in future similar initiatives. The Netherlands decided to step forward in 2016 and assumed the role of lead Nation of the Strategic Multi Role Tanker Transport (MRTT) Initiative. With Luxembourg, both Nations combined their requirements for Air to Air refuelling (AAR) and Strategic Transport in a Pooling & Sharing initiative to jointly procure a fleet of MRTT aircraft. The Hague decided to launch the MMF initiative, despite all the uncertainties linked with the management of a new cooperative multi-agency Programme.  Germany and Norway joined in 2017, followed by Belgium in 2018 and the Czech Republic in 2019. The six European Allies signed the Memorandum of Understanding (MRTT-MoU) and became members of the MMF Support Partnership with equal membership rights, regardless of their level of participation and funding contribution. The MMF Nations will share the use of a fleet of Airbus A330 MRTTs, as well as their sustainment and operation.

Lessons learned from the MMF project

The first lesson learned and probably most important one from the early stages is to acknowledge the fact that a multinational pooling and sharing initiative comes full of uncertainties that cannot be identified and planned to the detail from the very beginning. It is necessary to dare launching a Programme, with a clear vision of the desired outcome and a committed group of Stakeholders to make it a success.

The second lesson learned is that a strong lead Nation is essential to the success of a multinational cooperative Programme. In MMF, the Netherlands have played a crucial role as the driving force by providing key personnel, by chairing the Programme management bodies (Steering Group/ Support Partnership Committee) and the MMF Executive Board, providing essential Host Nation Support etc.

The third lesson learned is to make creative, fair and transparent cost share arrangements by calculating the financial contribution per Nation based on an annual Flight Hour (FH) factor that defines the National participation in the Programme. Nations benefit from economies of scale of this multinational cost share arrangement.

The fourth lesson learned is linked with the framework of the MMF initiative:  the legal construct of the MRTT-MoU allows for broader participation across institutional limits.

The fifth lesson learned is interconnected with the above. An important aspect to consider in future initiatives is the fact that the Programme management structures should be clear, unique and established at the beginning. This was the reason behind establishing a virtual MMF System Management Office (SMO), tying all elements needed for the success of the Programme under the single direction of the NSPA System Manager.

The sixth lesson learned is that it would have been more effective if OCCAR and NSPA had clearly identified a lead Agency, created one Programme office, appointed one Programme Manager, and created a single Integrated Programme Team from the beginning, even using personnel from both organisations if necessary.

The platform selected to satisfy the AAR and strategic airlift capability was the Airbus Defence & Space (Airbus DS) A330-200 MRTT aircraft, a military Off-The-Shelf solution with a mature design, already in service for several users around the globe, which limited the design and development efforts. The final assembly of the A330-200 basic airliner platform is performed  in Toulouse. The civil aircraft then converts into an MRTT in the Airbus DS’ factory in Getafe, Madrid. This military conversion adds the ability to perform AAR, strategic transport of personnel and cargo, as well as Medical Evacuation (MEDEVAC) operations and limited VIP transport. All roles can be performed simultaneously if necessary.

The seventh lesson learned is linked with the weapons system itself. Having a single lead industry (prime) allows for an effective programme management.  Airbus DS acts as industrial prime for the MMF, taking responsibility for the production and a large majority of the entry into service of the aircraft. This allows for a simpler supervision from the SMO. Exceptions are the Directional Infrared Counter Measures system (DIRCM), the MEDEVAC equipment and some of the military components (radios, crypto etc.), provided through NSPA by MMF Nations  to Airbus DS as Government Furnished Facility (GFX).

The eighth lesson learned is that no industrial compensation (just return) was expected by the MMF Nations. This might seem an unprecedented example of generosity but it is a mandatory characteristic of any Programme managed by OCCAR.

The ninth lesson learned relates to the commonality in configuration throughout the entire fleet. The MMF requirements were harmonised upfront and during the initiation of the project, EDA was facilitating the harmonisation of the operational requirements of interested partner Nations. This allowed a smooth take-over by NSPA and OCCAR to further develop the Programme and engage with Industry with stable contractual requirements. Any nation joining the Programme has to accept the single configuration.

The tenth lesson learned, is that the inclusion of the Initial In-Service Support for a limited number of years in the acquisition contract assures smooth entry into service.

Do not reinvent the wheel

The success of the MMF initiative is a unique example of effective procurement of military capabilities through a multinational cooperation, in a pooling & sharing arrangement.  For most nations the cooperative approach will most likely become the norm in the immediate future, rather than the exception.

Industrial partners, nations and agencies are now encouraged to not reinvent the wheel and make the most out of the lessons learned by MMF, when shaping the new multinational, cooperative, multi-agency, pooling & sharing initiatives.