An onsite observation in Lebanon 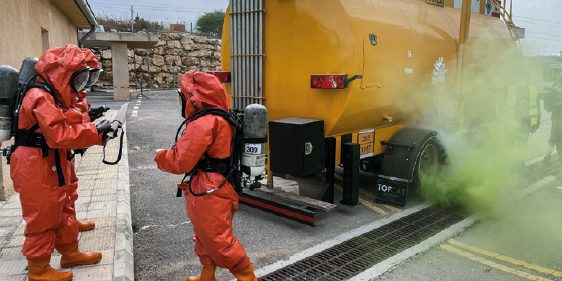 by Günter Povoden, key expert with the On-Site Assistance (OSA) for the Middle East region of the EU CBRN Centres of Excellence Initiative, Vienna

The distinguished reader knows that “Arz” is the Arabic word for “cedar”, the national symbol of Lebanon, the country which hosted the ARZ CBRN (chemical, biological, radiological, nuclear) exercise from 6th to 9th December 2021 – despite many obstacles such as the Covid-19 pandemic and the difficult political and economic situation in Lebanon, which interrupted the preparation of the exercise for two years.  The highlight, after a very successful exercise, was the final ceremony with the presence of high-level representatives, including three Lebanese government ministers, ambassadors and high-level representatives from other countries and international organisations.

Lebanon did a great job in difficult times!

The exercise location, the training centre of the Internal Security Forces Academy in Aramoun near Beirut, was perfectly suited for a complex CBRN counter terrorism field exercise. It contains all the infrastructure and professional staff to support such an exercise. Before the start of the exercise, which brought together the planners and the representatives of all participating institutions and units of Lebanon, the preparatory phase involved intensive cooperation, discussion about the scenarios and the adaptation to the needs and capabilities, thereby increasing the interoperability and mutual knowledge of national CBRN capacities. In addition, as a direct consequence of the tragic explosion in Beirut in August 2020, there has been closer interaction and cooperation between the different first and second responders.

The CBRN Commission of Lebanon played a crucial role in the implementation of the exercise. It can be considered as the “single point of contact” for all CBRN related activities in the country, under the leadership of the National Focal Point (NFP) for the EU CBRN Centres of Excellence Initiative, Dr Bilal Nsouli. As director of the Lebanese Atom Energy Commission (LAEC), he also facilitated the mobilisation of the LAEC staff in the preparation of the exercise scenarios. Equipment and materials from LAEC laboratories were used to simulate laboratory infrastructure and chemical precursors as realistically as possible. The scenarios were planned in great detail by the On-Site Assistance (OSA) expert for the Middle East region, in close cooperation with the French expert from Project 73, both under the umbrella of the EU CBRN Centres of Excellence in close cooperation with the LAEC staff.

Such an exercise requires the drafting of various planning documents, for instance the exercise manual, the so-called main event/main incident list, guidance for the role players and much more. The OSA expert was in charge of all the technical planning documents. A tangible output was also the preparation of an exercise planning guide summarised by the United Nations Interregional Crime Research Institute (UNICRI), based on all the experience from this exercise.

Apart from the technical preparation, countless administrative steps were necessary such as the organisation of preparatory meetings, translation of planning documents, invitations to observers etc. Most of these activities were organised by UNICRI, in close cooperation with the Lebanese CBRN Commission and the LAEC. Around 20 meetings, in-person as well as virtual, were organised around this exercise. The exercise itself, involving more than 200 participants, international and national observers and exercise staff members required professional logistics that were provided by the Italian implementer, Fondazione SAFE, with its local staff.

The first scenario simulated an incident at an illicit hazardous material storage site and a terrorist laboratory producing chemical and biological warfare agents, dirty bombs and explosive devices. Preventing CBRN terror attacks requires CBRN awareness and disrupting terrorists’ activities at an early stage. This was simulated by providing CBRN intelligence to connect the dots. A major part of the exercise was to arrest terrorists before the planned attack and detect, identify and secure CBRN materials and precursors for chemical warfare agents, toxins and explosives in illicit laboratories and storage sites.

The second scenario focused on the response to a CBRN incident, simulated by a terrorist attack on a VIP convoy using chemical materials and explosive devices. This scenario required the extraction of the VIP under CBRN conditions followed by the whole spectrum of CBRN activities such as detection, leak sealing, rescue and treatment of victims, decontamination, explosive ordnance disposal and site exploitation including forensics. These activities were disrupted by follow-on attacks and an additional challenge was to deal with such attacks under CBRN conditions.

The coordination of all injects, where some are running parallel, required professional exercise control. This task was given to the commander of the CBRN company of the Lebanese armed forces, Capt. Ziad Abou Malhab. His wide experience gained from other activities, like projects for CBRN capacity building in Lebanon funded by the EU Delegation, and his experience of missions in the aftermath of the Beirut explosion were crucial to successfully coordinate and guide all players in the field. I also want to highlight the important role of women as first responders: Lebanon had well-trained female first responders in team leader positions.

The evaluation of the exercise took place under the leadership of Lieutenant Colonel Andrea Gloria from Italy, supported by international experts from the OPCW, INTERPOL, the French police, SCK-CEN (The Belgian Nuclear Research Centre), Italian army, NATO School, and the OSA expert. This evaluation report was a valuable output and will be used for the development of future activities in Lebanon.

How can such a huge exercise be financed? On one hand there are the in-kind contributions for the planning, execution and evaluation by international experts working for EU projects, the UNICRI staff, representatives of the OPCW, INTERPOL, French police, Italian army, SCK-CEN, the NATO School and above all, the Lebanese authorities and stakeholders. On the other hand, the exercise logistics, catering, accommodation and travel costs of observers, interpretation, etc., requires a huge budget. Without solid funding, such an exercise cannot take place and this is why the European Commission, in close cooperation with ISTC (International Science and Technology Center) and UNICRI, provided the funding needed for this exercise.

Exercises like this are definitely worth funding to make projects more sustainable. ARZ 2021 is a great example of how the combination of national commitment and international cooperation can be effective if all the stakeholders and partners are working towards a common goal, which was to improve Lebanon’s CBRN counter-terrorism capabilities. It also showed that the effort of the EU CBRN Centres of Excellence Initiative in Lebanon was successful and sustainable in building technical capacities and reinforcing interagency coordination and cooperation. In order to repeat this success story, similar exercises are planned in the near future in the Middle East region.