The implementation of an innovative idea 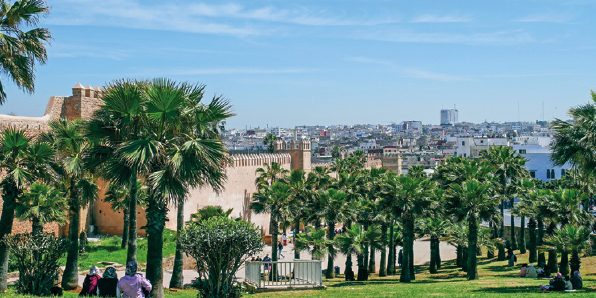 The European: Mr Salami, you have been the Head of the Regional Office for the African Atlantic Façade (AAF) region of the European Union CBRN Risk Mitigation Centres of Excellence (EU CBRN CoE) Initiative for 12 years and you will soon hand over to your successor. In 2019, at the annual meeting of the EU CBRN CoE Initiative, the AAF region was awarded a prize for “the most innovative project” which was related to the establishment of the first African specialised CBRNe Master’s programme.

When we met for an interview in Rabat, in the spring of 2020, you expressed your optimism that this regional initiative, strongly supported by the European Union, would start in 2022. How do things stand today?

Mohamed Salami: Ms Cazaubon, first of all, I would like to thank you for giving me the opportunity to discuss with you once again to take stock of the situation of the specialised African CBRNe Master’s degree.

I am happy to confirm that my optimism has been vindicated, with an effective start of the Master’s programme in January 2022. Today we are almost at the end of the training sessions for the first year’s student intake, coinciding with the start of the course for the candidates selected for the second intake.

The European: My congratulations on the successful start of your project! Could you give our readers more detail about the objectives of this specialised training course and the participants selected for the programme?

Mohamed Salami: Given the objectives of the European Centres of Excellence initiative aimed at strengthening the
capacities of member countries in the prevention, planning and intervention against CBRN risks, whether of natural or technological origin or linked to malicious acts, the AAF Regional Office deemed it necessary to organise high-level training for senior executives from countries in the region and made a request to the European Union, which approved it and agreed to fund it. The stated objective is to enable the various African countries bordering the Atlantic seaboard to acquire specialised skills, so as to be able to advise the competent national authorities on CBRN risk management, to be in a position to drive national strategies in this area and to steer the implementation of National Action Plans (NAPs) established in each country – and even to contribute to the development and implementation of a Regional Action Plan (RAP).

The European: How many students are there in each year and what is their distribution among the AAF nations?

Mohamed Salami: The 50 participants in the two years, distributed evenly between the eight French-speaking countries of the region, are mostly from security bodies and specialised scientific organisations.

The European: Could you say more about the different stages of the implementation for this remarkable project?

Mohamed Salami: After approval of the project by the CBRN National Focal Points (NFPs) and validation by the European Union, the Regional Office began to seek reliable partners for its realisation. Once that was done and the related administrative procedures completed, the various partners began implementing the project in three successive stages: firstly, selection of potential candidates on the basis of their background files, provided by the NFPs; secondly, organisation of distance training courses to upgrade candidates’ knowledge, the content and validation of which are monitored by experts, and thirdly, organisation of written and oral exams with a view to selecting the best candidates among those who successfully complete the various distance learning modules. As soon as the final list is drawn up by the jury, the NFPs and the selected candidates are informed and the administrative procedures are initiated to facilitate travel to Morocco and ensure that classes can start.

The European: Clearly, it takes time to put such an important project together. What were the main challenges and how did you find universities willing to cooperate?

Mohamed Salami: It must indeed be said that this project was not easy to bring to fruition. It took a long time and a great deal of effort to get it off the ground. In addition to the administrative and procedural constraints on the finalisation and presentation of any project, as well as the intense discussions with the competent entities of the European Union, it was necessary, for this specific project, to identify the shortest path and safest route to manage it reliably and efficiently.

This is why the Regional Office contacted the University of Haute Alsace in France, which has expertise in this field, having offered this kind of Master’s degree in France for many years, and the International University of Rabat, which has excellent infrastructure and sufficient experience in organising this type of training.

In the end, everything fell nicely into place, despite the context of Covid-19, which only delayed the start of training.

The European: May I come to the question of budget? Could you elaborate on how your region is involved and to what extent the European Union is financially supporting the project?

Mohamed Salami: In reality, the project is fully funded by the European Union for both student intakes and I would like to take this opportunity to express, in my own name and on behalf of all the NFPs in the region, my profound gratitude for its financial support and reiterate my sincere thanks to its senior officials for their understanding and commitment.

That said, the Regional Office is trying to convince the various countries to contribute financially, by facilitating and supporting the graduates of the two courses to organise training modules in their respective countries. In addition, my Regional Office is in the process of identifying the various donors who could be approached with requests for financial support for the organisation of additional sessions.

The European: You mentioned your gratitude to the EU for its contribution. Is the support from Brussels limited in time and in volume?

Mohamed Salami: We are in discussions with the specialised services in Brussels  with a view to extending the project for two more years in order to allow other candidates to benefit from it, including those from English-speaking countries who have not been able to benefit so far and possibly representatives of other countries than those of the Atlantic seaboard, knowing that there is a strong demand from the countries of the region and others who wish to take part.

The European: Mr Salami, now that the project is well on track you have decided to retire from the post of AFF Head of Regional Office and you will soon hand over to your successor. On behalf of our team, I wish him every success in the continuation of the region’s important work within the EU CBRN CoE Initiative and I express to you and your family our best wishes for the future.