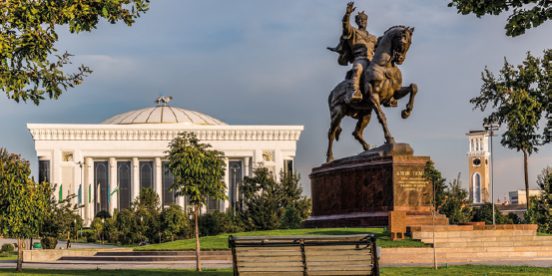 The European: Mr Gulyamov, you have been the Head of Secretariat of the Central Asia (CA) region within the Euro­pean Union’s Chemical, Biological, Radiological, Nuclear Risk Mitigation Centres of Excellence (EU CBRN CoE) Initiative since 2015. You are known for your innovative capabilities and your pragmatism, and you were one of the first to promote interregional cooperation in the field of CBRN risk mitigation.

Bakhtiyor Gulyamov: Mr Bühl, I am honored that you invited me to be interviewed for your magazine which pays special attention to security issues. Thank you.

The world is currently facing multiple challenges related to issues such as conflicts, the Covid-19 pandemic and climate crisis that are amplifying insecurity around the world. But how do we reverse this negative trend, how do we ensure that countries become more committed to the cause of security and stability? In an encyclopedia, I read that the “ability to set goals is one of the elements of human behaviour and conscious activity, which characterises anticipatory thinking, or thinking in advance of an activity result and ways to accomplish it with certain means.”

The European: At the end of 2019, during the international CBRN exercise Jeyran organised under your responsibility in Tashkent, you commented on the EU CBRN CoE Initiative: “We have a common charter and we made enormous progress in technical cooperation, but the initiative is far more: it is a human act”.

Bakhtiyor Gulyamov: Indeed, the EU CBRN CoE Initiative brings together a community of professionals whose aim is to reduce the threats and risks from the use of CBRN materials. The
interventions within the frame of the initiative combine efforts of each member, and represent an endeavour to create, maintain and guarantee safe living environments across all regions. It is achievable only by the actions and behaviour of each individual person. This is a human act that plays an utterly important role. I am sure that cooperation is primarily built between people on an individual, human level. In this way, human relationships further evolve into cooperation at the organisational and institutional levels; this way trust is built, and cooperation is strengthened.

The European: Let us go back to policy and the strategic importance of interregional cooperation in the actual political and economic context. What are the particular ties established between the Central Asia (CA) region and the South East and Eastern Europe (SEEE) region?

Bakhtiyor Gulyamov: As the Head of the CA Regional Secretariat, I concluded that the cooperation potential between my region and the SEEE region is high, and that our common historical past and similar development models enable stronger linkages allowing a constructive exchange of experience and cross-fertilisation of expertise.

Our joint containment of the spread of Covid-19 in the region is one example. By extending Project 53 on the strengthening of the national legal framework and provision of specialised training on bio-safety and bio-security – initially designed to cover countries of the CA region – to the SEEE region, we were able to strengthen capacities for managing the pandemic, establish an exchange of information regarding the application of primary epidemiological measures, support activities of epidemiological and clinical centres, and, most importantly, facilitate measures to maintain the performance of strategically important sectors of the economy in each country of the two large regions.

The European: What are the facilitators of such a cooperation?

Bakhtiyor Gulyamov: The development and implementation of joint events, actions and road maps are key points, as well as shared successes and lessons learned from the projects, supporting exchange visits among experts, replicating successfully implemented interventions.

Cooperation stimulates innovations at scale, contributes to the establishment and development of continuous partnerships between regions in the field of CBRN security. Other examples are the formation of joint working groups and informal and formal mechanisms for regular interregional consultations to discuss the current state and prospects for improving interregional and worldwide cooperation in the CBRN fields.

The European: Your region has been implementing an innovative project raising awareness of CBRN risks and threats. What is the idea behind this?

Bakhtiyor Gulyamov: There are a lot of ordinary people who do not know what CBRN threats and risks are, although they may encounter these in everyday life, or people, including children, living in places of such threats and risks of chemical or radioactive contamination. In most cases they are not aware of the detrimental effects of these existing threats. It is our task to explain to them the essence of such risks and adverse consequences for human health and the environment in a comprehensive yet understandable manner.

The European: And what is your pedagogical approach?

Bakhtiyor Gulyamov: Within this innovative project, we hold various competitions for children and adolescents at schools, conduct lectures for university students, with an aim to inform the population about existing risks. For such an awareness raising campaign to be sustainable, it is necessary to constantly engage educated and respectable community members who are able to reach out to a larger population, therefore we also educate teachers as the key target audience of our project.

Recently, as part of the exchange between the CA and SEEE regions, we successfully held similar awareness raising events in Georgia, and these interventions were enthusiastically received.

The European: What is, in this context, the added value of
interregional exercises?

Bakhtiyor Gulyamov: In November 2019, you came to Uzbekistan to observe the Jeyran field exercise in Tashkent, designed as close as possible to resemble a real-life event. On a national level, early warning and communication systems, logistical base and medical capacities were tested, and plans of action for response and recovery measures were clarified and adjusted. Today, due to globalisation processes, closer relationships, travel and interdependence between countries, threats such as pandemics, climate change, conflicts, and terrorism are transnational ones that require coordinated action not only within countries, but also between neighbouring countries, as well as at the regional and interregional levels.

The European: To delve deeper into the subject of cooperation, could you reflect on the interoperability of the material?

Bakhtiyor Gulyamov: Of course, the compatibility of equipment, means and materials employed during a CBRN incident would contribute to a greater efficiency. Therefore, this important aspect of standardisation and compatibility of such equipment, means and materials to be procured for the emergency services of neighbouring countries must be taken into account while developing and implementing projects and programmes of regional, interregional and global character.

The European: Mr Gulyamov, what is your appeal to the community formed by the now 64 partner countries of the EU CBRN CoE Initiative and the EU Member States?

Bakhtiyor Gulyamov: There is a global demand for mutual trust. We must engage in constructive dialogue and facilitate close cooperation between countries, as dialogue and cooperation are and will continue to be critical for ensuring CBRN safety and security. The EU CBRN CoE Initiative provides a platform for dialogue and cooperation among countries. Therefore, I encourage all partner countries of the initiative and the EU to continue dialogue and expand and strengthen cooperation in the field of CBRN risk mitigation within the framework of the initiative for our common cause – security and prosperity for all. In the end, all our efforts to increase the efficiency of emergency services will ultimately result in saving human lives.

The European: Mr Gulyamov, thank you very much for the interview.

The Interview was led by Hartmut Bühl.