Keeping troops effective in the face of advanced CBRN threats 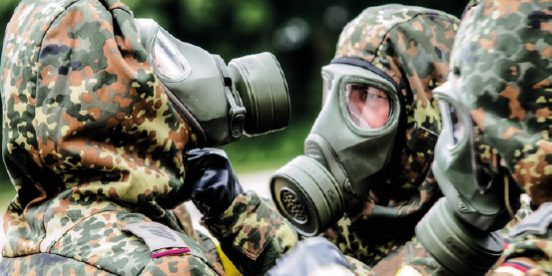 The use of fourth generation chemical agents in Salisbury (UK), continued nuclear sabre-rattling from North-
Korea and Iran, nuclear power plants (NPPS) under threat like in Zaporizhzhia (Ukraine), the exploitation of World War 1 chemical warfare agents documented by the Organisation for the Prohibition of Chemical Weapons (OPCW) in Syria and the spread of ballistic missiles are only a snapshot of the tense and complex chemical, biological, radiological and nuclear (CBRN) threats that have emerged in and around Europe over the last few years. The Russian attack on Ukraine and its brutal consequences mark a turning point in the threat perception of the European population.

The possible use of CBRN materials and weapons against European countries by hostile aggressors continues to be a tangible threat and needs to be addressed politically by greater coherence in security and defence and a common sense of purpose and urgency in the resulting actions. Of special concern is the erosion over recent decades of the global security architecture in arms control, disarmament and non-proliferation of CBRN materials and weapons, with a negative impact on geopolitical strategic stability.

NATO has initiated a process of addressing CBRN risks, has closed ranks, enhanced deterrence, increased the Alliance’s defence capabilities and tackled the complex security threats with a new Strategic Concept, which was endorsed at NATO’s Summit in Madrid 2022. In addition, NATO heads of state and government have turned their focus to threats posed by CBRN weapons of mass destruction and approved a new NATO CBRN defence policy. CBRN threat assessments are shifting back to state actors. Russia is explicitly referred to as “NATO’s most pressing CBRN security challenge”. This clear focus on state actors with extensive and diverse CBRN weapon arsenals has an impact on the capability profile required by NATO, which must now invest more in CBRN defence capabilities in order to ward off the threatened use – or protect and recover from the actual use – of CBRN materials and weapons.

Assuming the reality of CBRN risks

The EU must be aware that the trend towards possession and use of CBRN materials and weapons will continue and should not expect a secure system of control and verifiable destruction of weapons of mass destruction and their delivery systems to be set up, even partially, in the foreseeable future. In addition, the destruction of all chemical weapons declared in the context of the Chemical Weapons Convention is unlikely to be completed by the end of 2023. Therefore, a credible deterrent through effective, sustainable and robust CBRN defensive and protective measures is essential. Consequently, the EU and its Member States should continue all preventive activities aimed at strengthening the international framework of arms control, disarmament and non-proliferation, along with efforts to protect the European population, regions and forces from CBRN threats, and, should these measures fail, to recover from the effects of a CBRN attack.

However, not only do CBRN attacks directly targeting unprotected troops carry the risk of enormous damage, a further potential risk, as demonstrated in Ukraine, is the damage to critical and CBRN-related infrastructure itself.  Nuclear power plants in Europe, not unlike the Zaporizhzhia NPP, have the potential to endanger the population and military throughout the EU, especially if they are deliberately chosen as military targets. As seen in Ukraine, preventing an enemy from damaging critical infrastructure is not always possible, so protecting potentially affected troops and appropriate recovery methods take on an even greater importance.

Pragmatic efforts: the example of Germany

The CBRN Defence Command of the Bundeswehr is a joint enabling headquarters that is not only responsible for equipping and training sufficient and appropriate CBRN defence capabilities but also for the functioning of the CBRN Defence System of the German Armed Forces. This fully acknowledged conceptual approach to protect against CBRN hazards enjoys international recognition. It is organised around a set of interdependent preventive and reactive measures that aim to significantly strengthen all parts of the German armed forces through a detailed and systematic CBRN risk and threat analysis, precise and methodical CBRN advice, CBRN individual and collective protection measures, and CBRN reconnaissance and decontamination. In this way, the CBRN defence system contributes to maintaining or restoring the operational capability and readiness of the Bun­d­eswehr by a flexible and effective response to potential CBRN threats and risks and can be deployed across the full mission spectrum of the Bundeswehr. The organisational structure, capabilities and functions of CBRN defence are designed to be graduated and sustainable. Depending on the CBRN threat and risk analyses for a given mission, these capabilities can also be used in a modular fashion. CBRN defence tasks are carried out in all military services in an echelon-appropriate manner at various capability levels, including

By allocating CBRN defence capabilities to these capability ­le­vels, the CBRN defence system creates synergies that­­
ensures not only the protection but also the operational readiness of deployed forces. It enables troops to survive a CBRN attack and restore their operational effectiveness, essential not only in the face of a direct military confrontation, but also considering new threat scenarios such as hybrid conflict. The linking of covert and overt operations, the interplay between diplomatic pressure and economic sanctions and targeted disinformation via the internet and social networks all blur the line between war and not war. In such situations, the threat from CBRN materials and weapons complicates decisions about protective measures. But in both direct military confrontations and new forms of warfare, the focus remains on the protection of soldiers in the field. The CBRN defence system ensures that this focus is maintained, thereby contributing to credible and robust European security and defence capa­bilities.

We are surrounded by instability and conflicts and face a dangerous mix of armed aggression, illegal annexation, fragile states, revisionist powers and authoritarian regimes. This environment is a breeding ground for multiple threats to European security from terrorism, violent extremism and organised crime to hybrid conflicts, instrumentalisation of illegal migration, arms proliferation and the progressive weakening of the arms control architecture[1]. CBRN materials and weapons exacerbate this situation. The EU’s Common Security and Defence Policy (CSDP) must fully acknowledge this development, design capacity building measures and provide resources to strengthen the provision of effective troops capable of stopping the proliferation of weapons of mass destruction, protecting against CBRN hazards and taking appropriate recovery measures should prevention fail.

[1]   A Strategic Compass for Security and Defence for a European Union that protects its citizens, values and interests and contributes to international peace and security.